skip to main | skip to sidebar

The first thing that struck me about Munich was that the sun was shining.  I'd left my sunglasses in  the village where the sun had not shone brightly for weeks; I was confident that I'd have no need for sunglasses.  There was very little snow on the ground to bounce blinding light into my eyes, but the sun was coursing low across the sky.  Sometimes, coming around a corner, I'd instantly look down to avoid the blare of light.  As the lanes and plazas are uneven cobblestone, I was all the better for it.  But I would rather have donned my black Pradas, pretending to be someone mysterious, and turned my face to the light like a Valley girl (whom, during this central European winter I have deeply envied).

I came up from the U-Bahn at Odeonplatz.  The theatre district is lovely and would be a fun place to linger in the spring or summer.  On this day, it was cool in the shade of the gardens and the enormous buildings.  I was happy to find a Starbucks, and entered knowing I had the look of someone who has too long been without a fix but recalls the ecstasy with a certain level of desperation - no one got in my way!  I got directions from a young lad who looked like he had just had his twelfth birthday, but who was trusted to sell coffee.  He spoke English quite well, but he had no idea what VIA was and I had hoped to buy some directly from a store instead of purchasing it on Amazon.com (which, when you come to think of it, is extraordinary and I am duly thankful for the marketing person who bet her career on that move). Outside, I looked for a place to sit for a moment, to reorder my things after my purchase of a "city cup" from Starbucks, but could not find a bench anywhere, other than in the middle of  square near the shops just before the Marienplatz where there was a long line of benches - absolutely no one was in this square and you'd have to cross icy patches of old snow to get to the benches.  So of course I did, just so that I could comment on the absurd city planning.  Sitting down to people watch was not an option in Munich - at least in winter.

I wandered in the direction of the Marienplatz, a gathering spot for locals as well as tourists.  I heard the 43  carillion bells long before I spotted the steeple of the Neues Rathhaus.  The glockenspiel show is what everyone comes here for, but knowing the bells would sound at 11, noon, and again at 5, I didn't need to hurry.  Because I couldn't see the tower, I was able to separate the sound from its source, and just focus on I the sweet sounds.  The next time the carillion sounded, though, I was in place to watch the show and found myself captivated by the glockenspiel mechanism - and the crowds who had come to view and photograph it.  This neo-Gothic structure stands apart from most other municipal buildings in the square; it is altogether too playful.  Beneath the glockenspiel, is a recess in which a colorful array of 32 life-sized wooden figures dance, twirl, and slowly chase each.around.  The procession, reminiscent of that on a cuckoo clock, includes knights, maids, jesters, and farmers.  In the top half of the tower, the figures represent the wedding of Duke Wilhelm V and Renata von Lothringen that took place in 1568, and a tournament in which a Barvarian knight triumphed over an Austrian knight (of course).  The show starts on the bottom half of the tower with the Schafflerstanz (the cooper's dance) which is significant because it was a demonstration by the intrepid barrel makers that the town was once more safe for habitation after the plague in the 16th century. (Without barrel makers, there would have been no beer.  One wonders about the disruption of the plague on trade.  But, with so many people dying - at extraordinary and terrifying rates all across Europe -  a slump in the economy might not have been at the forefront of people's awareness. Still, one wonders...Why were barrel makers the first ones back in the streets?  It puts new meaning to the expression "Roll out the barrels!")  These brave and industrious barrel makers performed a dance (which may have been enlivened by consumption of their own wares) to encourage people to come back to the streets.  This dance so pleased the Duke - who must have been discouraged by being Duke of a medievil ghost town - that he insisted the dance be re-enacted every seven years (seven being a number of some mythic powers throughout history - locusts and such.)  The next official Schafflerstanz  is scheduled to occur during the German Carnival (Fasching)  in 2012.  The whole show lasts between 12 and 15 minutes depending on the tune that plays.  You know the show has ended because a very small golden bird at the top chirps three times - a bit denouement.  I would have preferred the loud crash of symbols. 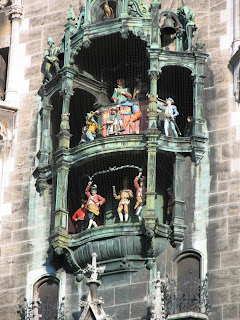 Essentially, the whole of Marianplatz is associated with marking or warding off the effects of war or disease.  The large column at the center of the square was erected in 1638 to celebrate the end of the Swedish invasion.  The square was originally named Shrannen but it was renamed Marienplatz (St. Mary's Square) to ask the Virgin Mary to protect the town from a cholera epidemic. Cholera, great floods, the plague, and the incessantly quarrelsome Swedes.  Such was the medieval existence in Bavaria.

I had lunch at a restaurant directly in front of the Neues Rathhaus.  I chose to sit outdoors at a table complete with blankets and heaters (which weren't needed on this day) and a perfect view of the glockenspiel.  While I was eating an enormous bowl of curried goulash ((this was less, I think, a deliberate attempt at fusion cuisine than it was an attempt to prepare food that people other than Germans will eat).  The bread roll seemed more French than German which was too bad because German's do make good bread.  For that matter, so do the French.   Just pass the basket of bread, please.  While I was happily engaged in gustatory and auditory activities, a man, who was busy gazing up at the glockenspiel show, walked past me several times.   He wore the traditional Gamsbart hat, but instead of the fan of chamois neck hair, his flair was an enormous tassel that could have been used to hold back heavy drapes.  If the size of the traditional chamois fan on a man's hat  is meant to declare the wearer's manliness and be a source of pride, this dangling tassel broadcast an unmistakable message.  I ignored this German peacock, except when his back was turned and he couldn't see me quietly chortling to myself.. Bavarians are serious about their Tracht outfits and get all gussied up in their costumes at the slightest excuse.  It is tantamount to Americans dressing up like Yankee Doodle Dandies and Betsy Ross to go to a country fair, sit on the Ferris wheel and stare at 4-H livestock.  Urban Germans, who seem to appreciate the way those who wear Tracht might look to outsiders, like to compare - and justify - Tracht to the clothing that Country Western fans wear.  Be that as it may, and I'm not even  going to mention the state of Texas here, is just a little scary to see Germans so visibly and proudly holding on to their past. 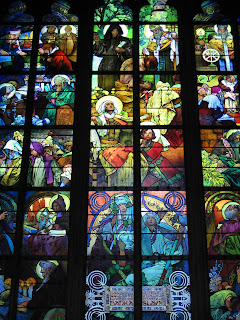 After lunch and listening to a full round of the carillion, I went to the Kunsthalle der Hypo-Kulturstiftung  to view the Alphonse Mucha exhibit.  It was my primary reason for coming to Munich at this time in the winter, and the exhibit was all I had hoped it would be.  As I stood gazing at the two enormous canvases from the Slav Epic, I wondered why it is that Mucha has never achieved the same sort of fame as, say, Caravaggio.  He certainly had the technical skill; his epic paintings are amazing.  His Apotheosis of the Slavs and Holy Mount Athos were the only two room-sized paintings from the Slav Epic on display at this exhibit, which was intended to be a sampling of Mucha's work.  That there were over 200 varied pieces on display gives you an idea of the range of the man's artistic expression. The Slav Epic paintings Mucha so cherished - and to which he devoted a huge part of his life - are extraordinary works depicted in a subtle art nouveau style that is dreamlike and creates a sense in the observer that it is so ephemeral that it will not be there if you look away for an instant, and then look back.  Doubtless, his focus on nationalism was offputting to some and offensive to others. Its tragic that he could not stop painting the Slav Epic and come round to something that would appeal to the masses past the time of the current politics.  Something like, say, the Sistine Chapel.   At least, in Prague, some important pieces of Mucha's are permanently available for viewing:  impressive allegorical paintings adorn the Municipal House; an overwhelmingly beautiful stained glass window graces St.Vitas Cathedral.  Mucha could easily have rivaled Tiffany had he continued with glass as his primary medium.  I need to go back to Prague and spend more time with the art nouveau architecture and Mucha's work.  I want to find out what is happening to the Slav Epic now that it will be moved from the castle in Moravia that has housed it for so many years - a castle, due to its size - is a good venue for the Slav Epic.

To answer my original question:  Is Munich really Italy's most northern city?  Point-by-point, Italy has Caravaggio, Milan fashions, the Duamo, and citizens who greet you with smile (even in Milan).  Munich has Klee, Tracht, castles, and citizens who stare at you with Botox-like blankness.  I would have to say no.  Munich cannot shake off its heavy Bavarian cloak.  Ars longa, vita brevis.  Viva l'Italia!


The photo of St. Vitas Cathedral window is a file from the Wikimedia Commons and is licensed for sharing under GNU Free Documentation License.
Posted by Gigi at 10:58 AM 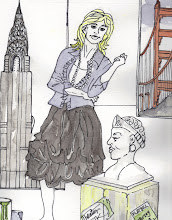 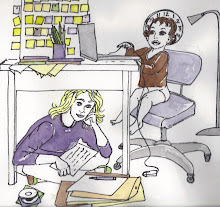 No Starbucks. But a church on every corner. 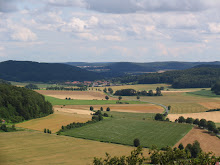 All Ye Who Enter Here... 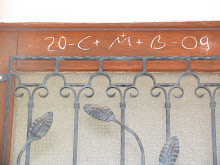 Watch your step. Look up!